The Aurora Soccer Club is an organization dedicated to the promotion of sports for the enjoyment of its members and the Community.

Founded in 1954, the Club consisted of 2 senior teams that played every Saturday in the Newmarket and District Soccer Association. The Aurora Firsts in the first division and The Aurora Maroons in the second division. 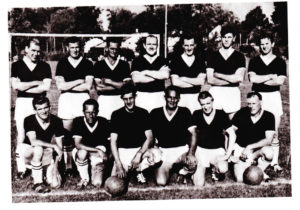 The early 1960’s saw a huge growth in the popularity of the sport across Ontario especially with the younger ages. In 1964, the ASC formed the new Aurora Minor Soccer Association which had over 400 boys involved by only its second season. The Minor Soccer became the Aurora Youth Soccer Club, “AYSC” in 1967 and continued to be run through the ASC until 1971 when the Minor Soccer became so popular that it required its own dedicated team of organizers.

The early 1970’s saw the introduction of a new “Old Timers team” to exhibition play. This team still continues today on Wednesday nights as The Over Fifties, and has played exclusively for almost 20 years against the West Rouge Blues team (who travel to Aurora each week). 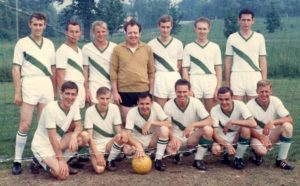 1984 became the most significant year for The Aurora Soccer Club Incorporated upon the signing of a lease with The Town of Aurora for a parcel of vacant land at the southwest corner of Town.

The Field was originally named Alliance Park to honour the “alliance” of ASC, AHSC, Spartans and Fury, (the two latter unfortunately folded during the 2 year negotiation with the Town). The field was then renamed Highland Park after Highland Chev/Cadillac dealership became a major sponsor.

The Club then organized many fundraising efforts to develop the property into a playable surface. The biggest hurdle was turning the large slope into a flat smooth playing surface. Luck then came in the form of a labour dispute on the neighbouring property that was being developed for housing. The builder was approached and agreed to bring his earth-moving equipment over to do the grading! Tires were placed on Industrial Parkway to prevent damage to the road surface and the work began.

Shortly after the field was level, construction began on the clubhouse structure. It was originally designed to be a 2-storey structure, but ASC was only permitted to build 1 level. Later, the floodlights and an irrigation system were installed. All the work was undertaken at the Club’s expense and funded by events such as Bingo drives, barbecue’s and other club in-house events.

Since 1966, the Club has travelled far and wide on many occasions to places such as Colorado, New York City, Rochester New York, England and Montreal. ASC has also been host to many teams such as Colorado, Danish Club – Koge Boldklub and English Club Boldmere St. Michael’s.